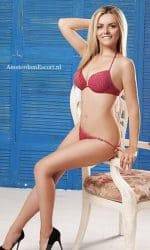 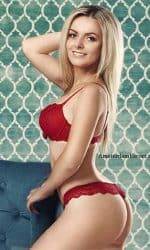 All Eyes Are on You When Mikaela Is Around

Some guys have all the luck. Because, they seem to always have women naturally gravitate toward them — especially the pretty ones. In addition, maybe you have always wished that you were that kind of guy. Well, guess what? Amsterdam is a city where adult dreams can come true, so get ready.

Could Mikaela Make Your Dreams Come True as Well?

Amsterdam escort Mikaela loves her job because all of her dates leave happy and satisfied. Further, she is proud of her abilities to lift your mood and get your engine running. Because, when it comes to fantasies, all you need to do is ask. Mikaela is no shrinking violet and has heard it all before, so don’t be shy.

Would you like to engage in a little bit of role-playing with Mikaela during your time together? In addition, she will leave the script to be written by you and promises to play her part well. Whether your fantasy involves a naughty schoolgirl, a saucy maid or a not so prim and proper schoolmarm, Mikaela will pull out all the stops to make your sexy dreams come true.

Why Mikaela Made Her Way to Amsterdam

Mikaela grew up in a small Bavarian hamlet where Oktoberfest was the biggest excitement of the year. But she quickly grew tired of pulling taps on kegs of beer for drunken tourists. Moreover, when she turned 21, Mikaela made her move to the big city of Amsterdam. Afterwards, the sights and sounds of the Red Light District were a siren song that became impossible for her to ignore. Finally, Mikaela soon made her debut as a much sought after Amsterdam escort. She loves living in the freedom-embracing Netherlands and has no plans to return to the Bavarian Alps (except for a few ski trips here and there).

Mikaela’s Favorite Fun Things to Do in Amsterdam

Like most German women, Mikaela is quite fit and active. She loves all the traditional Northern European sports like ice skating and skiing. When the weather cooperates, she loves to bicycle around the city on errands or simply just to explore new territory. That’s an easy way to keep her lithe figure fit and trim. Perhaps the two of you might tandem bike around town?

Mikaela loves to go to the local pubs to drink beer and watch the latest football matches (that’s soccer for you Americans!). She loves to sing and knows a surprising number of ribald drinking songs that can get everyone laughing and break the ice. So, don’t be shy. Join in on the chorus and have a great time!

While she didn’t partake back home in Germany, Mikaela has come to love smoking cannabis in the “brown cafes” of Amsterdam. She finds that it often relaxes both her and her dates to visit a local coffee house and enjoy a smoke together. Then, the two of you can quietly slip out to enjoy some private carnal pleasures together.

Who Says Three’s a Crowd? Not Mikaela!

As a liberated European woman, Mikaela is open about sex and has quite a robust appetite for experiences with both men and women. If you would like to enhance your sexual repertoire by adding another lovely lady to the party, Mikaela can often recommend a beautiful friend. She likes to arrange couple’s dates as well and will always make sure that everyone leaves satisfied.

Seal Your Deal with Hottie Mikaela

In conclusion, are you ready to commit to a date with this beautiful and sexy Amsterdam escort? Go ahead and prearrange your date now to be assured that Mikaela will be ready, willing and available during your very next visit to Amsterdam.

Back To Main Gallery